Lanzarote's impressive national park is a vast sea of lava dotted with dormant volcanoes and fascinating rock formations. Its name, Timanfaya, meaning Fire Mountains, is a reference to the volcanic eruptions that devastated the island for six long years from 1730. This destructive period of history created one of the most spectacular landscapes on Lanzarote.

Timanfaya National Park gives visitors a unique insight into the world of volcanoes. You'll feel like you're exploring Mars as you discover the craters and peaks of this dramatic landscape.

What to see in Timanfaya National Park

Head to this area of the park to watch demonstrations of its continued volcanic activity. Experience the immense geothermal energy hidden under the surface of the earth as you watch water poured on the ground turn into a powerful geyser!

Entrance to the park includes a tour by guagua (bus) of the Volcano Route. This 13-kilometre trip takes you deep into the mountains, learning all about the history and geology of the national park while marvelling at its spectacular volcanic landscapes.

With an incomparable location on the top of the Islote de Hilario mountain, the El Diablo Restaurant is not only one of César Manrique's most emblematic works, it's also a great place to enjoy traditional Canarian food with a special touch.

The restaurant's most striking detail is that the food is cooked by geothermal heat on a huge cast-iron grill placed over a hole in the ground! The dining room boasts a large window offering unparalleled views of the Fire Mountains - the ideal setting to taste volcano-cooked Canarian delicacies.

Lanzarote is a land of volcanoes and there's no better way to immerse yourself in their importance to the island than by discovering the Fire Mountains. Timanfaya National Park welcomes more than one and a half million visitors every year, who come to explore its other-worldly scenery.

Next to the park, you'll find the Echadero de los Camellos, a popular attraction where you can enjoy a 25 minute camel ride for a different experience of the volcanic landscapes. You can book your camel ride via the following link:

How to get to Timanfaya National Park

There are two ways to get to Timanfaya National Park: by car or with an organised tour. If you're renting a car in Lanzarote, you'll find the roads well signposted and you can park at Islote de Hilario, next to the El Diablo Restaurant and the park's other main attractions. To explore the rest of the park, you catch a guagua, or tour bus, from here.

Timanfaya is a very popular place to visit, and you may find long queues to enter the park, especially during high season.

If you're not planning to rent a car in Lanzarote or if you'd prefer to let someone else take the wheel, you can book an organised tour including hotel pick up and an English-speaking guide via the following link: 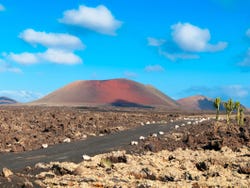 The road to get to the Fire Mountains 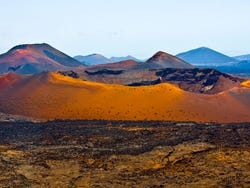 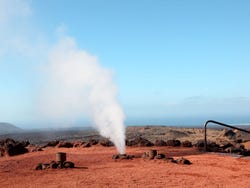 Demonstration on the Hilario Islet 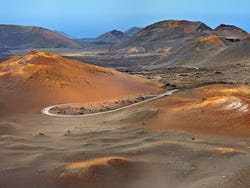 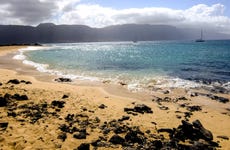